If your radio bricked after you edited the config file, it is possible to unbrick it by removing the Barracuda module and placing it in a radio that has a different hardware-id e.g. a module from an Intempo (761), inside a Logik IR100 (1012). Once powered up, you can login and restore the config file edits (since the new radio boots using the config files for its radio hardware-id, not the one you messed up).

The following procedure will take you through the restoration of your radio using a simple JTAG cable, with software we have provided.

In order to recover a bricked radio, you will need:

'Wiggler' compatible cables are a popular low-cost cable, and well supported by the free jtag tools. Plans to make your own are widely available, and prebuilt ones can be found cheaply on ebay and similar sites.

A "universal" wiggler will come with bare wires which can be soldered to the jtag test points on the barracuda board.

N.B. The Barracuda board needs to be installed in a powered up radio (standby is OK) for the JTAG process to work.

Sharpflash supports only wigglers connected on the Parallel ports (LPT1, LPT2, LPT3) of your computer. Since these ports become very rare there may be the need to update Sarpflash to support wigglers on USB ports etc.

A cable and the JTAG unit that worked in a backup/restore test were:

Note that the cable for this JTAG unit has both a male end (to be attached to the PC) and a female end that will be directly connected to the JTAG unit. The cable should NOT be too long (max 5m) and it should be a "normal" printer cable (DB-25), but not with 36 pins on the female end (like some very old printers had/have), but with the D-Sub (because it is D-shaped) 25pin on both sites (D-Sub M/F 25pin).

The off-the-shelf unit should have the necessary bare wires to solder to the Reciva board. The only problem with those commercial wigglers is their usage of input pins. Hence, it may be necessary to adjust some of the inputs, e.g: 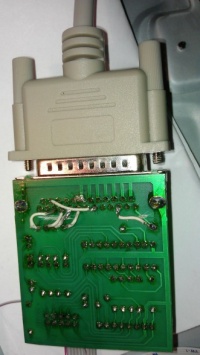 We need at least 4 of those (excluding also the nTrst point, that was not always needed in our tests). Hint: Put very little solder on the points of the Reciva board first, then a little bit on the bare wire and then connect them using a solder iron. This should not be too difficult and you do not need special soldering skills, just be sure to not damage the gold-plated contact points. An alternative that worked too is to build a transparent board (plastic, plexi) where you can plug in you bares, that you will place just above the Reciva board:

But note that to construct the transparent board and fix the cables such that they are perfectly connected to the Reciva board may be even more difficult than solder the 4 + 2 wires to the board.

Or see Barracuda JTAG Connectorfor instructions to make a custom connector which does not require soldering to the gold pads on the Reciva module.

10/10/12 : User:Philipp used a off-the-shelf wiggler based on this circuit that needed small modification (and soldering skills), see images above

19/08/08 : I used a wiggler based on this circuit. This worked 100% on the first attempt. Note this uses HC rather than AC logic, which is advised in several places.

The application sjf2410, along with the error correction code from the linux kernel have been modified to produce a bespoke utility for the baracuda module's NAND flash. It uses the wiggler cable in the parallel port.

Sharpflash v 0.4 was successfully tested under Windows (Cygwin with ioperm and giveio) and under Ubuntu Linux (both running in a 32 bit environment). To use Sharpflash with a 64bit version of windows we may need Inpoutx64.dllinpout64.

This version of sharpflash supports reading and writing of the NAND flash using the wiggler parallel port interface.

This software is far from perfect. It takes a lot of time to restore/backup the whole NAND flash

You can make a back-up of your flash via JTAG using the following format commands:

Will extract the contents of the kernel partition into 'kernel-mtd1.bin', which is a nanddump format file, skipping any bad sectors as it goes. Have a look at Reciva NAND Flash for the background on the flash structure.

This process takes a long time to run - roughly 80 seconds per 16KBytes, so a full 16Mb flash will take about 24 hours.

Will write the boot sector from the file boot-mtd.bin, and will produce an output similar to this:

If you want to restore your whole radio nandumps, you may need all of the following commands:

As above, the first number is the starting address and the second the nandump size (in hex). Please double-check if these sizes/addresses are correct for your radio too (e.g. via a working sharpfin webserver backup page or just try to get the numbers from the file-size and calculate the "next" address respectively). The formula of course is: new address = old address + old size (the order should always be boot, kernel, root, config, debug; but please double-check that too for your radio)