This page is for owners of Radios who wish to make changes to the software/firmware running on radio, but are a bit lost as to where to start. This gives an overview and a few pointers into the Wiki.

Almost everything described here may be breaking the terms of any warranty you have with the supplier. Quite a few of the things described run the risk of turning your radio into a "brick", see 10 Sure-Fire Ways to Trash Your Radio. So, proceed at your own risk. That said, the methods do work if followed carefully.

What can I change ?

There are two types of change possible;

Where do I start if I want to change things on my Radio ?

All the changes start by patching the radio, see Enabling Login, which describes the process and has links to help files and three video tutorials.

Once completed, the radio's internal files can be observed from a web-browser, or can be changed by gaining internal access through telnet.

This first stage is enough to allow changes to the Config.txt File.

The next stage is Changing Firmware.

The radio is initially patched so that it can be accessed using a web-browser. The Web-browser is used to request a specific firmware version number file, which is saved onto the computer.

It may help if you have a clear model of operation when making changes to a Radio.

The Radio is running Linux, and is a cut-down specialised computer. By using the various tools on this site, its possible to communicate with the Radio.

When the Radio is running normally, it communicates with the internet via a wireless router. (some models also have wired connection). It does not need to communicate with your computer.

The Patchserver application (see Enabling Login ) runs on the PC. The radio's configuration is changed so that the radio treats the Patchserver as its gateway, rather than the wireless router. The Patchserver can intercept requests from the Radio for "new firmware" and supply specific firmware back to the radio. Initially this is the Sharpfin application (next paragraph), but it can also be a whole new Firmware file. 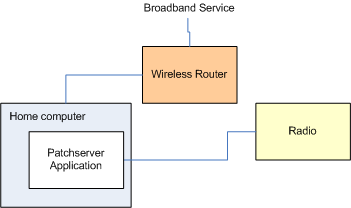 Exploring Radio with a Browser, and requesting Firmware from Reciva

When the Sharpfin base patch has been added to the radio, it now has a webserver and a telnet server in the radio. The Radio is configured to communicate with the wireless router in the normal manner. Using this arrangement, a Web Browser on the PC can explore the radio. The Web Browser can be used to instruct the radio to download a firmware file from the Reciva website. Rather than attempt to display a binary file, the Web Browser is used to save the firmware file to the PC. 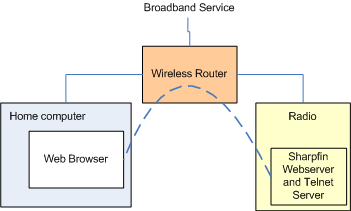 Exploring and Editing with Telnet

The PC can also communicate with the Radio using Telnet. This gives the user a "dumb terminal" which allows direct access to the Linux commands and files within the radio. For example, the user can invoke the "vi" command to edit a file within the radio.